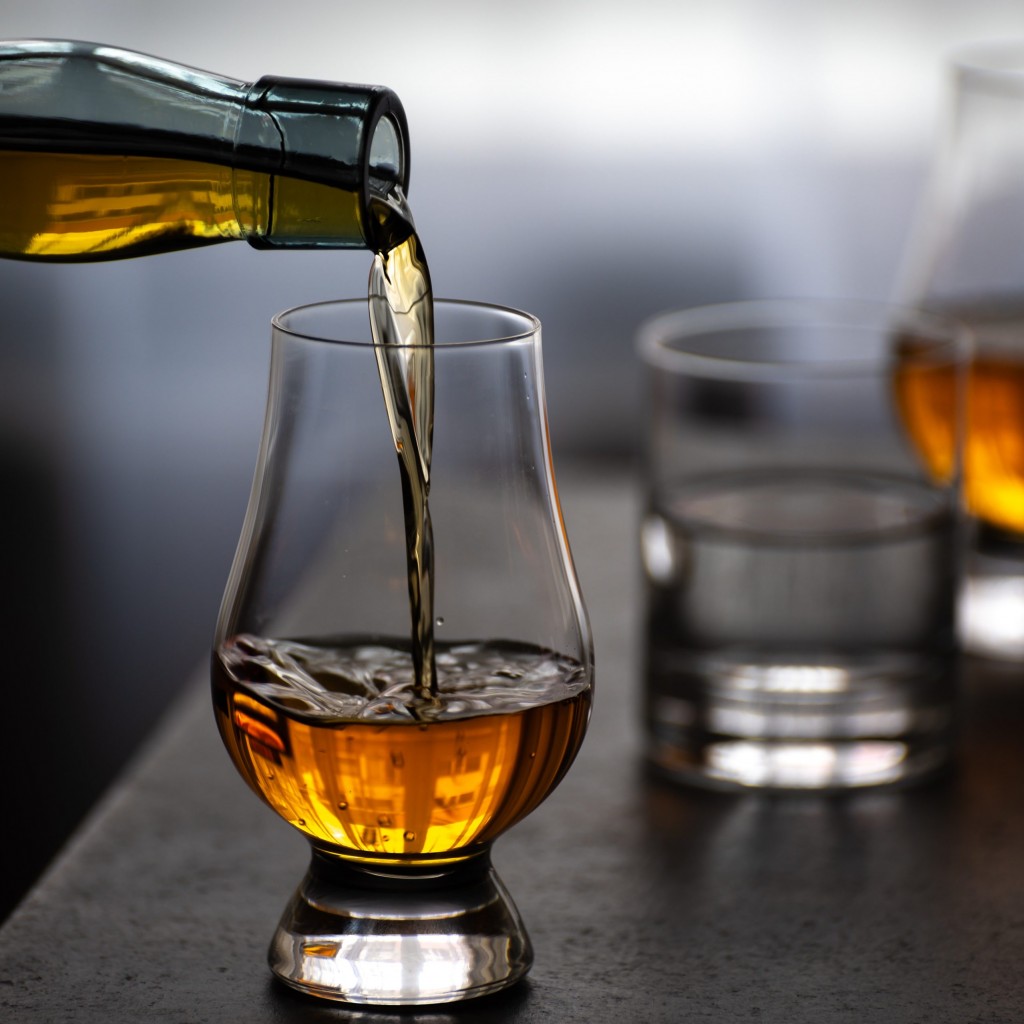 Whiskey or whiskey is the generic name for a set of spirits made by distilling malted or unmalted cereals.

What is the origin of the word whisky?

Whiskey was rather consumed for its medicinal virtues, hence the term “water of life”. The Gaelic term for “water of life” happens to be “uisge beatha”, which will gradually become “ooshki” then “whiskey”.

How to define a whisky?

The color of a whiskey may vary from the palest yellow to the darkest amber. This is rarely uniform. Golden, copper, reddish, bronze or even greenish reflections are often apparent. Certain refinements such as those carried out in port casks also bring surprising pink nuances.

What is the difference between whiskey and scotch?

First of all, pour your whiskey into a tulip glass, with a tight neck which will allow you to concentrate the aromas, and that's it! Avoid putting ice cubes in it, this could cause a thermal shock which would harm the aromas. The ideal serving temperature is around 15°C.

The different types of whiskey

Each type of whiskey has unique flavors
The taste of a whiskey varies a lot between different types of whisky. This change in flavor is explained by the many production processes used but also by the variety of ingredients used during the manufacture of whiskey. Before tasting a whiskey, it is interesting to know how it is produced to better understand all its flavors.

The making of whiskey:

If the list of ingredients is simple, the preparation requires extreme precision. The art of transforming three common elements into a beverage of impressive richness is a real work of magician!

- Humidification: The first step is to malt the barley, to make the barley is soaked in water for 48 to 72 hours depending on the atmosphere where the operation is carried out. Soaking barley makes it possible to obtain a humidity rate of more than 40% in the barley grain, whereas this rate was around 15% initially.

-Germination: Once moistened, the barley is spread on a malting area where it begins to germinate. Germination is the release of enzymes that convert starch into sugar. It must imperatively be stopped before the sugars are consumed, the drying stops the germination along the way.

Drying: To carry out the drying, the grains of malt are heated in large ovens which, for some, use a peat fire which gives smoky notes to the whiskey while drying with hot air will give it roasted aromas. The degree of peating can be measured in ppm (parts per million), which will indicate the level of intensity of a peated whisky.

It is therefore thanks to the peat fire that the best peated whiskeys exist!
Once dried, the barley is ground into a powder called “grist”.

 Step 2: Brewing, mixing the malt in the water

Second step, mixing, the water used must be low in minerals, to do so it must not be in contact with the underground layers. The location of a distillery is often chosen according to the quality of the nearby water source. To brew the grist obtained previously, it is mixed with a first water heated to 60°C which transforms the starch into sugars, the must obtained is kept.

The grist is remixed in a second water, heated to 70°C, which allows the last sugars to be extracted. The must of the second mixture is then added to that of the first. Then we start the operation again for a third and last time with water heated to 80°C which will be reused for the next brewing.

 Step 3: Fermentation, the transformation of sugar into alcohol

We have the must, we can move on to the third stage. The must is first cooled to 20°C and then transferred to the fermentation tanks. A yeast is then added to the vats which will transform the sugar in the must into alcohol. Once the transformation is complete, we obtain the wash, a liquid with an alcohol content between 6 and 8°.
Depending on the type of yeast used during fermentation, the whiskey will develop specific aromas. Among the aromas resulting from fermentation, we can mention fruity, floral and cereal flavors.

After fermentation, we move on to the most important stage in the development of whiskey, the passage in alembic!
Here many parameters play on the character and the final aromatic palette of the whisky: the size and shape of the stills, the duration of the process, the inclination of the gooseneck or the number of distillations. Depending on the distilleries, the wash passes two or (more rarely) three times in stills of different sizes.
Distillation consists of heating the still, to raise the alcohol vapors in the gooseneck, we then obtain a liquid with a very high degree of alcohol.

 Step 5: Aging, maturation of the whiskey in barrels

After distillation, comes the stage that has the most influence on the aromas of whiskey, aging. The eau de vie obtained by distillation must mature in barrels for at least 3 years to obtain the whiskey appellation, the longer it ages, the more it will develop rich and complex aromas. Depending on the type of cask used (used, new, white oak, American oak, old sherry cask, etc.) and its size, different aromas will be developed at a more or less rapid rate, the color of the spirit will also change. If you want to know more about the influence of maturation on the color of whiskey, we talk about it in a part of the article on whiskey tasting.

During aging, the barrels are stored in cellars called “rack warehouses” (warehouses equipped with metal racks to store the barrels). The external environment (temperature, climate, ambient air) also plays a role in aging by providing specific aromas to it. A good example is Canadian whiskey Pike Creek which ages in a warehouse with a temperature varying from -35°C to 35°C depending on the seasons.

Once the whiskey ages, it must be bottled, either the whiskey is not blended in the case of a single malt, or it is blended with other whiskeys in the most harmonious way possible by a master blender and will become a blended. Once assembled, water is added to reduce the alcohol volume of the whiskey from around 70° to 40°.

There you go, we can finally taste our bottle of whiskey!